Shehroze Kashif, a 19-year-old boy from Lahore climbed the 8,849-meter (29,032 ft), Mount Everest, on May 11, 2021, and stood on top like a proud son of the nation he is, holding the Pakistani flag. He became the youngest Pakistani to climb Mount Everest. His Facebook page confirmed at 5:25 AM:

“ALHAMDULILLAH ALHAMDULILLAH Received the text confirmation from Shehroze Kashif The history has been made !!!!!!!!! Ma Sha Allah Shehroze has summited Everest Pakistan is So Proud of You Son  Youngest Pakistani to stand on top of the world  Congrats Pakistan ” 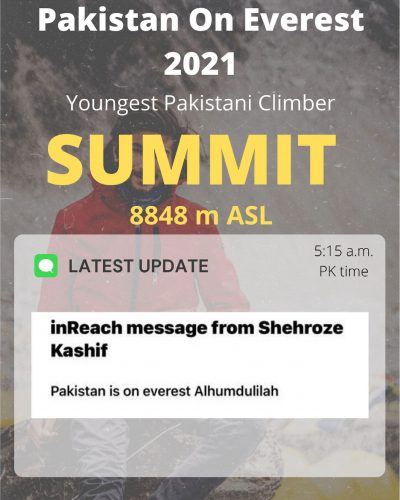 Before setting off, Kashif wrote on his Facebook: “After years of wait and prep, the moment has arrived finally so it is getting very hard to control my emotions. I’m bursting with excitement, energy, and determination. The last couple of years I have done all I could to prepare and be ready for this moment,”

This great journey started for Shehroze Kashif at the age of 11 years when he achieved his first milestone climbing the 3,885-meters Makra Peak. He went on to achieve greater in the following order:

His expedition to the Broad Peak earned him the title “The Broad Boy”.  Now at the age of 19, he has summited the tallest mountains of them all, the mighty Mount Everest. 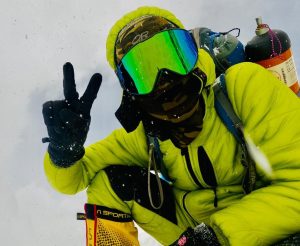 While speaking with DAWN, Shehroze’s father Kashif Abbas said: “On his first trek, I had asked the guide to take him to the top and from then onwards Shehroze went to all trips on his own.”

“So far I have supported Shahroze and the response to his success is overwhelming. Probably after Mohammad Ali Sadpara, he is the most famous Pakistani climber,”

He also called his son a “Special One”.

Shehroze Kashif himself also spoke in different TV interviews sharing his first experience at a mountain top and what he has learned so far from his wonderful journey. He said “Whatever I had imagined was not there at the top. However, when I reached the top, I felt proud that I have achieved something,” He also shared “The strongest thing in the world is the human mind, you cannot beat it. If your brain stops working at a higher altitude, that’s a big thing. You have to train yourself for those conditions,”

In an Interview In February this year, He told how hard the training is in a few words, saying “There is no comparison between the training levels of a cricketer and a mountaineer. Sometimes, we have to climb for 26-hours in one go,”

The young mountaineer revealed many things in different interviews, one of them being the estimated cost of his journey. He said that the Everest expedition cost him Rs10 million, with no sponsorship from the private sector or the government. This shocked the anchor. He also complained openly about the government not supporting him the way cricketers are supported, saying “If the government can give 10 million to each cricketer, it can do anything.”

Every Pakistani Who Has Climbed The Everest

Also note that the youngest person to climb Mount Everest was Jordan Romero, An American-born mountain climber who was just 13 years old when he reached the summit of Mount Everest in 2009.